University of Illinois researchers have 3D printed a miniature micro-plasma device that could be used to develop more effective antibiotic treatments for otitis media.

Compared to regular antibiotic treatments, which can induce bacteria to develop defensive “biofilms”, their approach offers “increased penetration”, according to the researchers, and could even serve as a basis for the further development of drug-free remedies.

“Biofilms are very dense, which makes it difficult for antibiotics to penetrate,” says Helen Nguyen, Ivan Racheff Professor at the University of Illinois. “We believe that microplasma disrupts the biofilm by disrupting the bacterial cell membrane. So far we only have indirect measurements that support our idea, but we will check that in the future. “

“If we look at the structure of the [viral] We could increase the penetration of antibiotics through biofilms. ”

A cutaway view of the team’s 3D printed microplasma jet array device. Image via the Biofilms and Microbiomes Journal.

Also known as “otitis media” or “OM”, otitis media is a common disease in young children that can cause them to experience temporary hearing loss that affects their early language skills. While antibiotics are commonly prescribed to treat OM, studies have shown that they are ineffective in more than 70% of cases, making the infection the main reason for using general anesthesia in children.

Chronic cases are usually related to the formation of a bacterial biofilm in the patient’s middle ear, as their aggregated nature allows them to seed recurrent infections. To combat these virulent biofilms, researchers in recent years have experimented with microplasma-based approaches, which have proven to be a promising means of destroying pathogens in a confined space.

In one such test case in 2018, scientists were able to dramatically reduce the viability of viruses in ten-month-old biofilms, but their approach was not applied to OM-related pathogens. To fix this, the Illinois team used 3D printing to create a number of novel microplasma jet array devices before testing their capabilities by using them to “treat” various OM-loaded eardrum models. 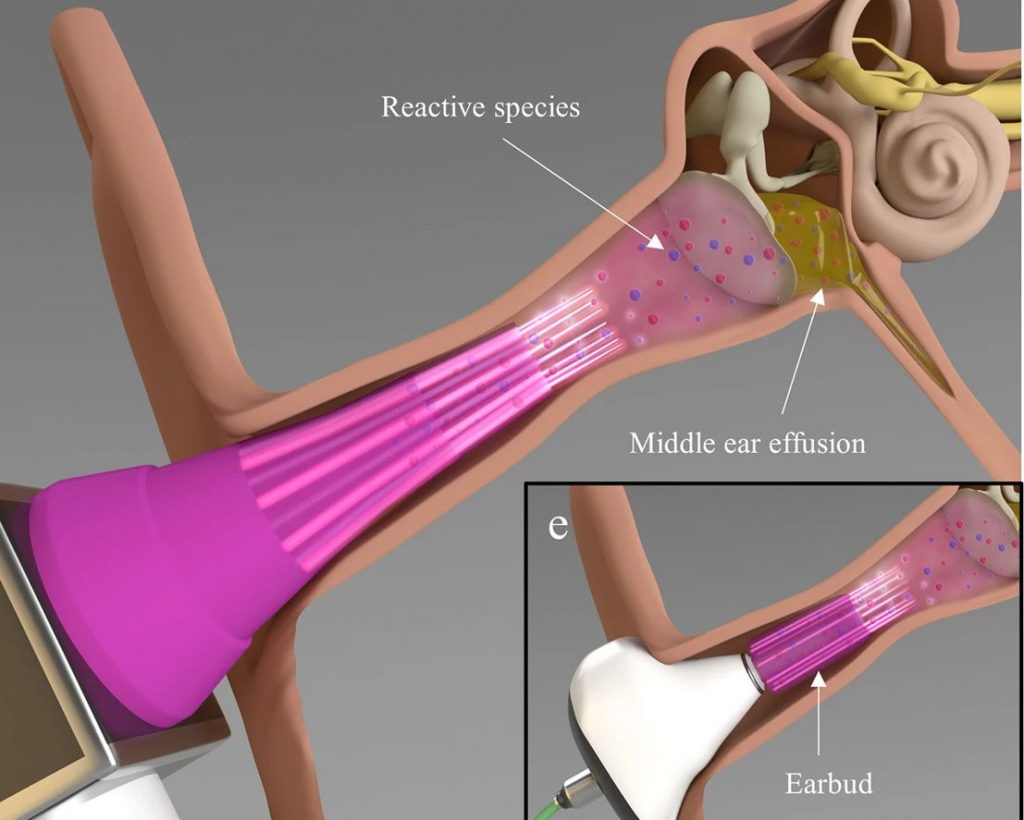 The researchers’ 3D-printed device can be attached to the top of a clinical otoscope. Image via the Biofilms and Microbiomes Journal.

A microplasma jet array in action

3D-printed from clear plastic, each of the scientists’ microplasma devices has a core frame with an integrated gas inlet, microchannel diffuser and electrode arrays. During use, the plasmas generated and trapped in these microchannel arrays can theoretically be injected into the back of the patient’s ears by helium to reduce the viability of acoustic pathogens.

To put their devices into practice, the researchers used them to treat a resected rat eardrum and chamber loaded with biofilms that harbor the common P. aeruginosa bacteria. Initial results showed that the team’s jet array device succeeded in removing around 90% of the pathogen in the “middle ear” area of ​​the test model after 20 minutes of continuous treatment.

However, since the rat eardrum is 30% thicker than that of humans, the scientists carried out further tests on an artificial membrane loaded with bacteria, which had a more representative porous structure. This time, the team found “no intact bacterial cells” after treatment, although they admitted that the gas used to transport the plasma to their test model likely destroyed the structure of the biofilm.

Going forward, the scientists say their device will require in vivo testing to verify their results. As a result, they are now developing a more human-friendly earphone-shaped model that will allow for longer exposure times, while also intending to evaluate its effectiveness in treating other infections such as Haemophilus influenzae and Moraxella catarrhalis.

“As a next step, we will use a 3D bioprinted eardrum or implantable eardrum scaffolds to examine their structures and properties, including tissue permeability,” the team concluded in their work. “Preclinical in vivo models, such as OM-induced chinchilla models, would also be helpful to assess the effectiveness of microplasma on naturally grown middle ear biofilms.”

The hearing potential of 3D printing

As the number of antimicrobial 3D printing materials continues to grow, the technology is increasingly being used to treat hearing disorders and develop improved hearing aids. Just last year, scientists at University College London (UCL) developed 3D-printed antibacterial hearing aids that have been shown to be effective in preventing ear infections with prolonged use.

Researchers at the Wyss Institute at Harvard University go one step further and have received FDA approval for their 3D-printed “PhonoGraft” for the regeneration of the human eardrum. Designed to mimic the appearance of real human ear canals, the eardrum could be used to treat ear trauma patients as it is able to heal itself by creating new cells.

On a commercial level, the 3D printer manufacturer Rapid Shape launched its Studio Line HA20 II, HA30 II and HA40 II systems back in 2018. The machines are specifically designed to 3D print hearing aids quickly and easily while delivering related parts that are both biocompatible and of professional standard.

To delve deeper into additive manufacturing, you can now subscribe to our YouTube channel, which features discussions, debriefings, and recordings of 3D printing in action.

Are you looking for a job in the additive manufacturing industry? Visit 3D Printing Jobs for a selection of positions in the industry.

The featured image shows a cutaway view of the team’s 3D printed microplasma jet array device. Image via the Biofilms and Microbiomes Journal.