After nearly a decade, an interdisciplinary collaboration to model a 3D spider web leads to many surprising results

The spiderweb is an everyday architecture—non-monumental and easily overlooked. Yet artists and scientists are working to unlock the secret of its complex geometry, a mystery that could inspire everything from resilient new building materials to deeper understandings of the structure of the universe.

When artist Tomàs Saraceno first came to MIT in 2012, as the inaugural Center for Art, Science, & Technology (CAST) visiting artist, he had recently pioneered a new method of scanning 3D webs with researchers at TU Darmstadt in Germany using sheet lasers. Inspired by the idea that the early superstructure of the universe might have resembled a spider’s web, he then used these images to create the 2010 installation “14 Billions (Working Title),” a hand-knotted reconstruction amplified to 17 times the web’s original size.

Meanwhile, materials scientist Markus Buehler, the McAfee Professor of Engineering at MIT, had been studying orb webs—the flat, radial Halloween staples—for years, analyzing how the strong-yet-flexible silk might inspire new building materials. He had long been interested in the intersection of materials and music. Using an approach to mathematics called category theory, he showed how natural hierarchical materials like spider silk exhibit properties comparable to various forms of music, in terms of their hierarchical structure and function. From this research, he developed a music based on the structure of silk. But, until then, he had never attempted to model a 3D web. “We always wanted to work on 3D webs,” he said, “but didn’t have accurate models of such complex structures.”

Soon, a collaboration was born. By 2014, Buehler’s lab, with special efforts from postdoc Zhao Qin and graduate student Bogda Demian, had created a computer model and simulation of the data generated by Saraceno’s scans for the “14 Billions” project, which they presented at a panel discussion at the MIT Museum. For the first time, they could not only accurately visualize the web but replicate its internal structure, gaining precise information about every single silk thread—the thicknesses, tensions, and lengths—and how they interacted to create such an elaborate architecture. This new analytical model developed by the lab gave rise to a new approach to studying the webs, and the applications were endless.

Saraceno later brought a tent-web spider/web, said to have inspired architect Frei Otto’s design of the 1972 Olympic stadium in Munich, to the MIT lab. Installed in a carbon frame, the Cyrtophora citricola proceeded to spin a web for the researchers to document in situ. “This collaboration becomes an engine for ongoing speculation about the ‘umwelten’ of spider/webs, opening up new possibilities for experimentation in methods, scales and techniques for interspecies relation,” said Ally Bisshop, a researcher in Saraceno’s Arachnophilia Research Laboratory, which leads the studio’s community and interdisciplinary research project Arachnophilia.

Over the years, Buehler and Saraceno refined the three-dimensional models, using increasingly advanced imaging and simulation techniques. In the near decade that followed, with the support of CAST, their model of the spiderweb has led to an enormous array of undertakings, both together and with their respective labs: a digital web archive, a virtual reality simulation, live musical performances and “cosmic jam” sessions with spiders and their webs, multiple peer-reviewed scientific research papers on the spiderweb’s structural and mechanical properties, sonifications of spider silk proteins, 3D-printed spider silk, and an app for citizen arachnophiles that launched the 2019 Venice Biennale, among other projects. At times, the collaborations themselves seem to resemble a three-dimensional web: complex forms, knotty with unexpected and intricate connections, surprisingly enduring, and often very beautiful. 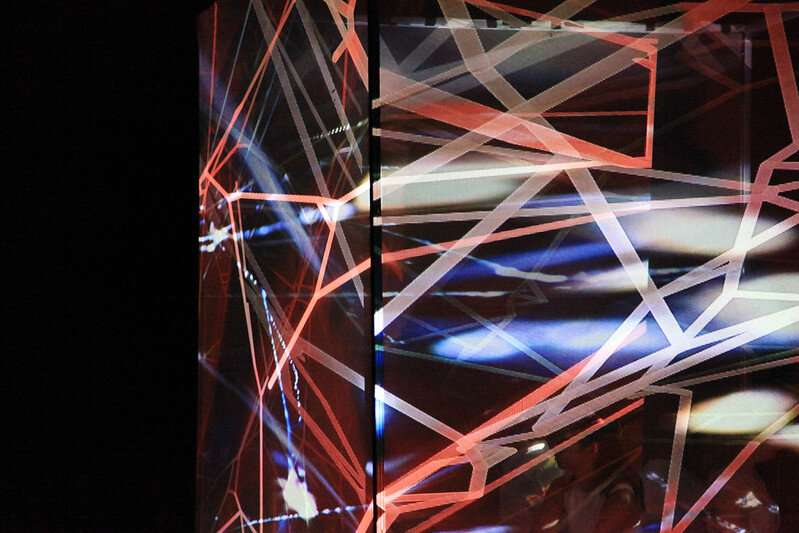 The spider web as musical instrument

The structure of the spiderweb also inspired many new musical pieces. For one, Buehler and his team developed a granular synthesis technique that mimicked the biochemical process of silk production. Just as silk is composed of molecular components, granular synthesis uses grains of sound that are then assembled into a new form. More recently, Buehler has combined this kind of web sonification with his molecular music, overlaying frequencies and melodies extracted from the proteins that make up silk, as well as other key features of spiders, such as the venom molecules. In 2020, Buehler produced the video, “The Oracle of the Virus, the Spider,” for Studio Saraceno that displayed his work exposing spiders to vibrations.

Another spinoff emerged when composer and clarinetist Evan Ziporyn, faculty director of CAST, made a pit stop at Saraceno’s studio in 2015 while passing through Berlin. They had gotten to know each other’s work during Saraceno’s visits to MIT. “Tomàs always had this dream of a collective instrument based on the spiderweb,” says Ziporyn. “It was a kind of cosmic drum circle, as he conceived it.” In the warren of old warehouse buildings, Saraceno’s studio was a freewheeling ensemble of designers, architects, anthropologists, biologists, engineers, art historians, curators, and musicians. “It had a crazy sort of Andy Warhol Factory meets Eastern European startup vibe,” Ziporyn says. On the day Ziporyn arrived, the spider was unusually active, Saraceno informed him. He soon found himself improvising with his bass clarinet alongside the spider, whose movements were amplified by custom-made piezo mics that were developed through the years at Studio Saraceno.

A few years later, in 2018, Saraceno invited Ziporyn to perform as part of his “ON AIR” exhibition at the Palais de Tokyo in Paris. Ziporyn’s earlier impromptu performance, along with other interspecies musical experiments, had already been included in the studio’s exhibition, “Arachnid Orchestra. Jam Sessions,” and they wanted to extend the ideas even further. “It struck me that the web itself—thousands of strings—could be a kind of harp. So this connected back to Tomàs’s original idea years ago of building a spider instrument,” says Ziporyn. Next, he recruited a team of co-creators—Isabelle Su, Ian Hattwick, and Christine Southworth—to further develop the project, while Buehler’s lab developed the model and codes, including the interactive tools, for the piece that was later performed.

The resulting collaborative work, “Arachnodrone/Spider’s Canvas,” used a 3D model of a scanned Cyrtophora citricola web to construct an immersive, interactive soundscape, translating the structure into visual and sonic form. In the piece, Su, a doctoral student in Buehler’s lab who was recruited after attending Buehler and Saraceno’s 2014 talk at the MIT Museum, leads audiences through a virtual version of the web. Hattwick, a sound artist and lecturer In music technology at MIT, digitally sculpts the sonic information, while Ziporyn and Southworth add sonic textures using guitars, electronic wind instruments, eBows, and real-time signal processing. The project resulted in another peer-reviewed research paper, as well as a new work-in-progress by Ziporyn and Southworth, supported by the MAP Fund and a School of Humanities, Arts, and Social Sciences Digital Humanities Fellowship, based on the structure of snowflakes.

For Ziporyn, the experience provided a new opportunity for creative improvisation, with each member of the ensemble improvising alongside one another in their own unique medium. “Each performance is a newly generated thing,” he says. “It’s never the same. We never know what we’re going to get. It’s working out to be a real interactive improvisation. That to me is the essence of artistic interdisciplinarity.”

Building a web over time

This summer, Buehler served as the primary investigator for a new scientific study, published in PNAS and entitled “In-situ Three-Dimensional Spider Web Construction and Mechanics.” Other authors included Saraceno and members of his studio, and MIT undergraduates Neosha Narayanan and Marcos A. Logrono. By automating their web-scanning method with the help of complex computational algorithms, researchers were able to study not only completed webs, but ones still under construction. The computer model and simulations allowed them to study the web without destroying it. The lab found that the web, like the collaboration, is an object that transforms over time: as it grew in density, the web became stronger and tougher. After creating the initial foundation, a spider continues to make changes: adding, reinforcing, and repairing.

In addition, Buehler developed methods not only to model the spiderwebs, but also created physical artifacts using additive manufacturing methods: a resin-based printing that transforms a liquid into a solid, similar to the way a spider spins silk in nature, as well as a fused-deposition molding that uses the heating and cooling of polymers. Learning more about webs may inspire new self-sufficient and self-repairable smart structures. “We were just really blown away by the fact that there is a lot of internal structure,” says Buehler. “Some are like meshes, tunnels, less-organized regions of the web. From a materials perspective, that’s very, very interesting, because it gives you a lot of design ideas.”

The webs, Buehler found, are living materials—tunable, changeable, and responsive, thanks to the spider’s ability to alter the web over time. This is a future direction for the design of materials, as engineers are now trying to generate materials that are more alive than static to serve multiple and varied purposes, allowing for a sustainable life cycle that facilitates reuse.

Creating the infrastructure for collaboration

Residencies at CAST are open-ended, organized more around the free pursuit of ideas than any predefined product, and, as a result, particularly in the case of Saraceno, they often lead to wild and unexpected outcomes. While initial visits are exploratory, involving tours of labs and conversations over coffee, many ambitious projects—by artists such as Lara Baladi, Karim Ben Khelifa, Agnieszka Kurant, Jamshied Sharifi, and Anicka Yi—incubate over a period of months and years. What begins as R&D at MIT often grows into large-scale exhibitions at venues like the San Francisco Museum of Modern Art, the Guggenheim, and The Shed.

At times, these far-ranging and multifaceted projects challenge conventional ideas about how work gets made. “These collaborations scramble the traditional understandings of authorship in different disciplines—from individual, co-authorship, collectives, ensembles, co-creation, spinoffs. None of these existing conventions quite capture the nature of the work and its various components,” says Leila Kinney, executive director of CAST.

The webs offer us new ways of thinking about the world, and our interactions within it. “Museological collections tend to focus on the spider in isolation of its web. We argue for the importance of attending to the material architectures (webs) that connect the spider to the world,” writes Studio Saraceno. And while artworks have historically been treated as a static object produced by single individuals, this collaborative and ongoing creative work demonstrates how the web—the complex infrastructural network that supports the spider—is equally significant as the animal itself.

Provided by
Massachusetts Institute of Technology

Citation:
After nearly a decade, an interdisciplinary collaboration to model a 3D spider web leads to many surprising results (2021, August 10)
retrieved 10 August 2021
from https://techxplore.com/news/2021-08-decade-interdisciplinary-collaboration-3d-spider.html

This document is subject to copyright. Apart from any fair dealing for the purpose of private study or research, no
part may be reproduced without the written permission. The content is provided for information purposes only.

MU and MoDOT use recycled plastic to renovate the stadium boulevard