Up on the beach, near the tree line, the world’s endless love affair with plastic in all its ugliness was revealed.

In the once pristine sands of Vancouver Island, a large piece of styrofoam had been smashed to pieces by storms on the west coast.

Ben Boulton reached down and picked up a piece of the foam, technically known as polystyrene plastic, which is often used as insulation and packaging, and in this case it is apparently used as buoyancy under a large wooden walkway.

As part of a crew hired to clean the beach, Boulton demonstrated how easily the fluffy plastic crumbles by crumbling it with his fingers.

“This stuff is shattered by tree trunks. The whole winter storm action will just grind it into small pieces, ”he said, holding a nodule the size of a piece of corn between his thumb and finger.

“That leaves us with a little bit like this. It can seem like food to some creatures. It ends up in a lot of birds,” he said, explaining how often dead seabirds are found with plastic in their bowels.

Boulton is part of a project funded by a $ 7 million government coastal cleanup program in BC It is the most ambitious attempt to address the problem yet – the aim is to collect debris along the 1,200-mile (1,200-mile) coastline.

The money came from a special BC COVID-19 relief fund that aimed to help the hardest hit tourism sector by employing workers and ships. (Other money was set aside to remove derelict boats, which are also an environmental hazard.)

No matter how remote the beach was, the crews found a mix of large blue barrels, fishing floats, plastic buckets, water bottles, and other household and industrial goods – from the water’s edge to up into the trees on the shore.

One of the clean-up project managers, Peter Clarkson, said this year’s effort is targeting some very remote locations where “getting rid of the trash is really a challenge”.

This is because there is usually no road access, so that the crews have to be dropped off by helicopter. Even arriving by boat can be difficult, amid rocks and big waves on the west coast. As a result, workers spend up to 13 days straight in remote locations, from Estevan Point lighthouse north of Tofino to the north coast at Prince Rupert.

Often times they have to take it rough, cook their own meals and camp at night and then look for plastic during the day. Other crews enjoy the luxury of eating and sleeping offshore on boats normally used by guests who pay thousands of dollars to tour the British Columbia coast but are now busy cleaning up rubbish.

The lumps of foam Boulton pointed out – which, in his seasoned eye, he thought were “fairly fresh” – had probably only been on the beach for months. But some of it had already crumbled and mixed with the mother earth.

CLOCK | BC Beach Cleanup reveals every imaginable type of plastic:

The crews encountered all kinds of plastic while making massive efforts to clean up 1,200 km of the BC coastline. 0:40

“You can already see from this degradation that it has become part of the soil,” said Boulton, digging into the earth and revealing a mixture of green riparian grass, dark earth and pieces of white plastic foam.

“When you first appear, you look into this pristine habitat and see nothing, and then you come back and step back here and see large lumps of foam that will only devastate the environment.”

Millions of tons of plastic end up in the oceans

According to the International Union for Conservation of Nature (IUCN), an astonishing seven million tons of plastic end up in the world’s oceans every year. 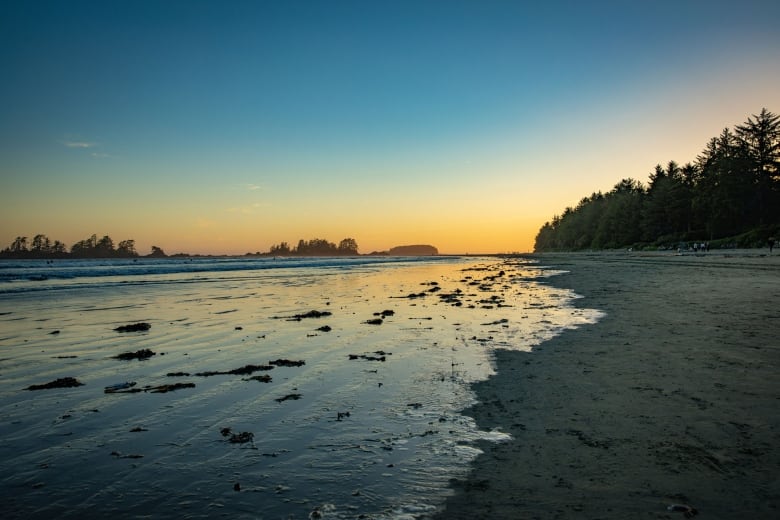 As soon as plastics start to break down, cleaning becomes more difficult. That is why the people who work hard on the coast aim for the greatest pieces. Plastic never completely disappears, but it breaks down into smaller and smaller pieces. Ultimately, it turns into microplastics that are too small for the human eye.

A recent study in the Pacific Ocean found microscopic plastic particles in each of hundreds of water samples collected over thousands of square kilometers. Microplastics were also found in all of the fish, squid, and shrimp collected in the same study. In BC, oysters intended for the dinner plate were found with microplastics in the meat.

Most of these microplastics come from larger pieces that break apart, but they are also washed into waterways by washing machines, which, according to Nature magazine, can release hundreds of thousands of particles every time a load of synthetic clothing is washed.

Many of the folks working on the BC cleanup, including Boulton, are usually in the marine tourism industry, so have firsthand knowledge of the coast’s appeal and have long been troubled by the ever-growing piles of rubbish that visitors see in wilderness travel.

But ridding the plastic of the coast means overcoming a number of daunting problems.

On a beach about 100 kilometers north of Vancouver Island’s tourist favorite, Tofino, Jeff Ignace grunted as he struggled with a jumble of plastic nets, ropes, and other debris that was partially buried under logs that washed up high on the beach. 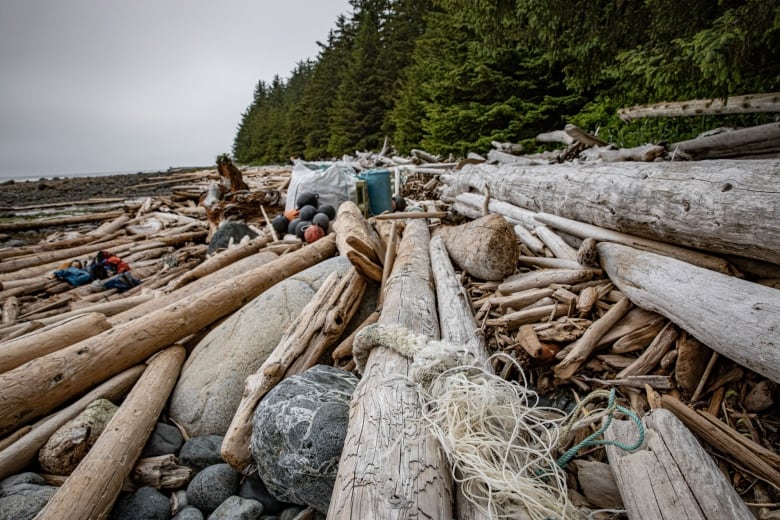 Ropes and other plastic debris are regularly entangled in tree trunks on many British Columbian beaches. (Greg Rasmussen / CBC)

“This probably weighs 200 pounds,” he said. He dug in with his hands, revealing a used plastic shotgun, plastic bags, styrofoam, and various pieces of hard plastic that he called “shrapnel”.

But most of them are nets and ropes from the fishing industry.

“It would take a month just to clear this section on your own to clear out all the little things that are in here,” he said, gesturing towards the pile.

As a member of the Hesquiaht First Nation, Ignace grew up on these beaches and has seen plastic build up over the course of his life. And it’s deadly, he said after seeing whales, birds and fish on the beach tangled in plastic. 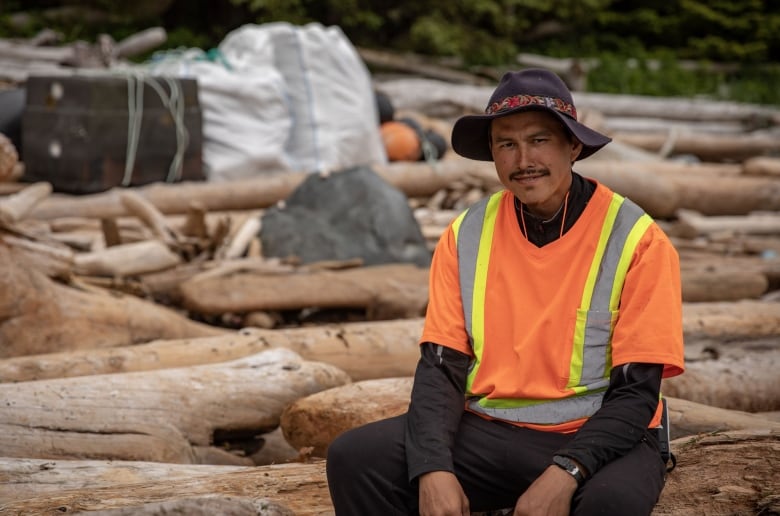 A member of the Hesquiaht First Nation, Jeff Ignace grew up on these beaches and has seen the plastic build up over the course of his life. (Greg Rasmussen / CBC)

Evidence of plastic longevity can take surprising forms – like washed up hockey equipment.

When he discovered something white in one of the piles the crew had collected, Project Manager Peter Clarkson exclaimed, “Oh, that’s good!” It was a plastic hockey shin pad that he believed was part of a cargo that had fallen from an ocean freighter a few decades ago.

“This comes from a spilled container – that is from 1994 off Cape Beale,” he said, trusting the origin of the plastic.

Clarkson, who retired from a long career at Parks Canada, helps with the cleanup. He’s spent many years as a beach collector, plagued by the flood of plastic, but found some relief by turning debris into sculptural art to send home a message about pollution. 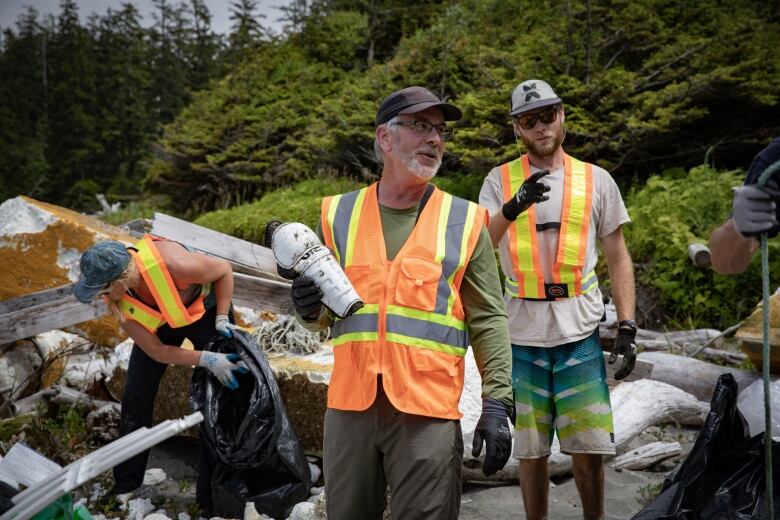 Clarkson, who retired from a long career at Parks Canada, helps with the cleanup. He spent many years as a beach collector, plagued by the flood of plastic. (Greg Rasmussen / CBC)

All debris collected on the beach had to be sorted, cleaned and then packed in sacks. Boulton, Ignace, and the rest of the crew worked long hours, struggling over slippery logs and sharp rocks to pile the rubble into sacks called “super sacks.”

Next, helicopters arrived, lifted the bags, and took them to a barge. From there it went to the port, where the bags are brought by truck to a recycling center on the mainland, where they are further sorted and processed.

On a recent visit, the new Richmond, BC recycling center was full. Semi-trailers pulled up and the crews dragged the large sacks into piles. Forklifts buzzed, nets, ropes and barrels were moved by the tons.

“A lot of these materials are contaminated … so we set up this center to specifically manage these materials so we can make products from marine plastic,” said Chloe Dubois, co-founder of the Ocean Legacy Foundation, a nonprofit work on various aspects of plastic pollution in the oceans .

The entire process is very labor-intensive and is made more difficult by the fact that a large part of the material is degraded in the sea through time. Some of this is processed in the recycling center and made into pellets, which can then be used to manufacture new plastic products.

“It is important that we start really stimulating the recycling industry and the use of recycled content so that there is a market for these materials.”

The scale is “massive”

Dubois hopes that growing public outcry over the widespread contamination problem will help put pressure on the industry to do more to prevent it – and clean up the existing chaos.

“The effects of plastic pollution are really being felt on a global scale, so there is pressure on companies to do something about the plastics they use and sell in their products,” she said.

BC’s cleanup program is expected to remove approximately 400 tons of plastic from the beaches. It sounds impressive, but it’s only 0.00005 percent of the 7.2 million tons that enter the world’s oceans each year.

CLOCK | Clean up the plastic trash choking the BC coastline:

Plastic and other debris are choking parts of British Columbia’s 1,200-mile coastline, but a crew of people are determined to clean up the tons of rubble. 8:34

Despite the ongoing flow of plastic washing ashore, it is unclear whether British Columbia’s multi-million dollar cleanup will continue after this year.

“The scale of the problem is massive,” said George Heyman, British Columbia’s secretary for the environment and climate strategy. “We have much more to do to tackle marine litter and its devastating effects on marine life and food sources.”

But Heyman didn’t want to comment on possible future funding.

Back on the beach, Jeff Ignace was visibly frustrated with the Sisyphean work he and others were facing.

“Garbage cans are made for a reason.” He pointed to the sea. “This is not supposed to be a trash can.”

This African village has the world’s first 3D printed school

Sperm utilized by researchers as an eco-friendly option to plastic