In the coastal villages of Indonesia, the plastic crisis is both indigenous and invasive

JAKARTA – In the coastal communities of Indonesia, which are the second leading cause of the plastic crisis in the oceans, there is a lack of proper disposal of plastic waste. This is the conclusion of a recently published study which found that the use of plastic is increasingly outperforming damage control efforts.

Researchers from Indonesia and Australia found that waste management and infrastructure capacities in coastal communities in the Indonesian province of South Sulawesi have not been able to effectively prevent plastic waste from polluting the marine ecosystem.

Indonesia is the second largest plastic polluter in the world after China. Plastic litter in the ocean has a negative impact on the marine ecosystem as marine animals such as whales, turtles and fish mistake floating plastic litter for food and ingest material they cannot digest. The plastic builds up in their bodies over the course of their lives, kills them or works its way up the food chain and eventually circles back to humans.

“The plastic crisis facing the oceans is well documented, but little is known about the perspectives and experiences of communities faced with overwhelming amounts of plastic waste, mostly from other regions,” he said Anna Phelan, lead author of the new paper and a researcher from the University of Queensland, in a statement.

Map of Indonesia with Selayar Islands and Wakatobi Islands shown in the rectangles. Image courtesy of Phelan et al.

The results of surveys, interviews and focus group discussions conducted by the authors of the paper with nearly 6,700 households in the Selayar and Wakatobi archipelago districts of the province showed that knowledge about plastic waste and its proper handling was relatively low while plastic was being used in rural areas are increasing with the higher availability and consumption of single-use plastic packaging.

In addition to the increased availability of processed packaged food, villagers identified other activities that contribute to the ocean’s plastic litter, including boat trips, fishing, seaweed farming, and seasonal monsoons that bring large amounts of additional plastic litter out of the ocean.

But even if plastics literacy were higher, given the limited choice of facilities on both the supply side and disposal options to reduce and manage waste, there was little that these communities could do to manage the waste effectively. The closest recycling facility to Selayar and Wakatobi is located in Makassar on the southern Sulawesi mainland, 173 and 273 kilometers from the respective subdistricts.

Litter doesn’t end up in a landfill or near a recycling facility in most coastal communities, the researchers found. In fact, an average of 2,000 kilograms of plastic waste per week could end up in the ocean from just one village. Residents burn their rubbish or either throw it directly into the sea or in piles that can be washed away in heavy rain.

Both Selayar and Wakatobi are found in the tropical marine waters of the Pacific Coral Triangle, which is considered the global epicenter for marine biodiversity. The region is home to more than 600 species of coral reefs worldwide, and most of the households there are fishing communities.

The worsening plastic waste problem has “trapped in a perpetual reinforcement loop” coastal communities like those in South Sulawesi, forcing “the impact of the plastic crisis on the ocean,” the paper said.

“In Indonesia alone, there are thousands of similar coastal communities struggling to dispose of their own household waste and large amounts of plastic waste from ocean currents,” Phelan said.

The researchers are calling for greater responsibility from manufacturers – the companies that make plastic packaging and single-use consumables – to solve the plastic waste problem in coastal communities. Actions they can take include increasing the percentage of recyclable content in their products and packaging, and providing recycling solutions for retailers. The paper also suggests a shift to a circular plastics economy – one where all plastic produced is eventually recycled rather than new plastic – as a “much needed” solution. 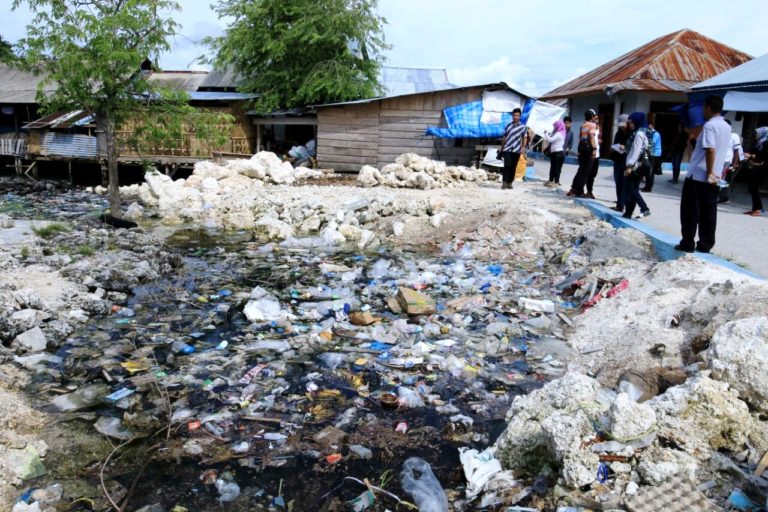 A plastic waste dump on the Wakatobi Islands in South Sulawesi Province. Image courtesy of Indonesia’s Ministry of the Sea and Fisheries.

According to a 2017 survey by the National Plastic Action Partnership from Indonesia, Indonesia produces around 6.8 million tons of plastic waste annually. Only 10% of this waste was recycled in the country’s 1,300 or so recycling centers, while almost the same amount, around 620,000 tons, ended up in the sea.

Indonesia plans to cut that number by 70% by 2025. Beach cleaning is one of the popular activities that are carried out here. Local governments are also looking to reduce single-use plastic consumption, including outright bans, while the private sector invests in sustainable alternatives. The national government also plans to get manufacturers to take more responsibility for the waste generated by their products.

“Manufacturers and manufacturers who distribute low-cost processed foods and single-use products to these communities must take responsibility for keeping plastic waste out of the ocean,” Phelan said.

FEEDBACK: Use this form to send a message to the author of this post. If you want to post a public comment, you can do so at the bottom of the page.

Massive growth of the medical 3D printing market by 2027