By mixing molybdenum with titanium carbide (TiC) powders, the ORNL team was able to create a “Mighty Mo” material that overcomes the usual brittleness and oxygen reactivity of the alloy. After EBM 3D printing, the metal matrix composite provides dense, crack-free parts that can withstand extreme temperatures, potentially making it ideal for use in demanding aerospace applications.

“Our results showed that it can be fabricated from a mechanically alloyed metal matrix composite powder,” said ORNL’s Mike Kirka. “The structures formed by the molten powders can withstand high temperatures, which indicates that molybdenum and its alloys can be used for aerospace and energy conversion applications.”

As a refractory metal, molybdenum has several properties that make it an attractive option for use in extremely temperature-sensitive areas. The alloy is characterized by an elevated melting point of 2622 ° C as well as a low coefficient of thermal expansion, thermal conductivity and corrosion resistance, but it is also known to have poor toughness at certain temperatures.

In addition, molybdenum is extremely sensitive to nitrogen and oxygen impurities during processing, which can cause the grain boundaries to separate, resulting in partial cracks. In the limited research that has already been done in this area, scientists have mixed the metal with other materials to better control its recrystallization and grain size, but with little effect.

As early as 2017, researchers at the Austrian powder manufacturer Plansee Group were able to use simulation data to quantify how the particle size of molybdenum contributes to SLM pressure sensitivity, but they did not fully solve the problem. In contrast, the ORNL team has now found that by adding TiC particles to the alloy and switching to EBM, microstructures with a new level of robustness and rigidity can be produced. 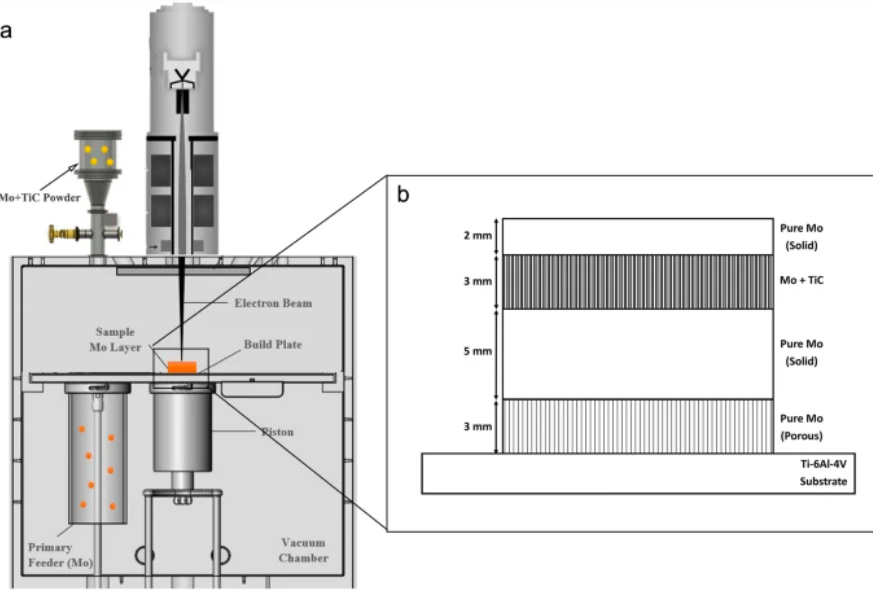 The ORNL team used a customized Arcam 3D printer (pictured) to conduct the study. Image via the journal Additive Manufacturing for Energy Applications.

To formulate their material, the scientists mixed Mo and TiC powders in a 60:40 ratio in a measuring cylinder that was flooded with argon gas to prevent oxidation. The resulting metal matrix composite was then mechanically alloyed using a planetary ball mill for eight hours until it was ready for 3D printing.

Using their machine, the researchers decided to 3D print six parts measuring 12mm (D) x 13mm (H) with sandwich-like structures that contain a layer of Mighty Mo sandwiched between two layers of pure molybdenum . Interestingly, SEM imaging revealed that none of the bare samples had suffered any cracks, but they did show some surface inconsistencies due to powder spreading.

The team later performed thermodynamic modeling, which also showed that the process remains extremely sensitive to changes in composition and temperature. As a result, ORNL scientists hypothesized that accurate management of process inputs will be key to creating future molybdenum microstructures without changing the sublayer consistency or temperature gradients during processing.

Ultimately, the researchers also concluded that they had demonstrated the feasibility of 3D printing pure crack-free molybdenum and, with a perfected set of parameters, could find new applications in aerospace or energy conversion, such as in areas such as heat transfer components.

While 3D printing pure crack-free molybdenum continues to be a challenge, a number of material manufacturers have managed to mix the alloy with other metals to create much more workable products. For example, Farsoon customer Hiwing Titanium Industrial recently developed its heat-resistant Mo-infused 3D printing material ‘TA32’.

The metal can withstand operating temperatures of up to 550 ° C and is designed as an alternative to superalloys based on steel or nickel. Similarly, scientists from Singapore previously succeeded in improving the printability of the Mo-loaded Inconel 625 alloy by mixing it with titanium diboride nanoparticles.

Elsewhere, 3D printer OEM Meltio has announced that molybdenum will also be validated for use with the latest version of its proprietary Meltio engine. After successfully testing stainless steel, Inconel (718 and 625) and Ti-6Al-4V (Class 5 and 23), it is now validating copper, aluminum, tungsten, X9 and gold, among others.