In what is believed to be the first project of its kind, Safran used SLM Solutions’ SLM (Selective Laser Melting) technology to produce a large-format nose piece that is 15% lighter than traditional forging. By adopting SLM, Safran was also able to speed up the qualification process of the part, quickly test various prototype iterations, and determine the optimal design within a few days.

“Additive manufacturing helps save time in the qualification and certification phase by quickly making the parts available for testing,” said Gerhard Bierleutgeb, EVP of Global Services and Solutions at SLM Solutions. “With the forging process, we were able to manufacture the main valve on the SLM 800 in a few days compared to a few months.”

By using SLM 3D printing, Safran was able to reduce the weight of its chassis components by 15%. Photo via Christian Fleury, CAPA Pictures, Safran.

Safran Landing Systems and SLM Solutions wanted to demonstrate the feasibility of using SLM 3D printing for the creation of main equipment for aircraft right from the start. The SLM 800 3D printer was chosen for this task in particular because of its vertically expanded shell, which makes it ideal for the production of components on a scale.

In order to be able to take full advantage of this switch to 3D metal printing, the standard part was completely redesigned, which led to a weight reduction of around 15%. Because of the strict regulations governing aerospace parts and the strength the landing gear would need to handle the aircraft’s load, it was also made using a resilient titanium alloy.

After printing, the nosepiece was 455 x 295 x 805 mm in size and featured excellent mechanical properties such as high durability and natural corrosion resistance without the need for surface treatment. The SLM 800 proved consistently reliable, providing engineers with the ability to quickly modify, print, and test parts while effectively minimizing device research and development time.

According to Thierry Berenger, additive manufacturing project manager at Safran Landing Systems, SLM Solutions’ system has shown that it is up to the task at every stage of the program. “Due to their expertise and the SLM 800 machine, we have selected SLM Solutions as a partner that exactly meets our requirements in terms of machine size and reliability.” 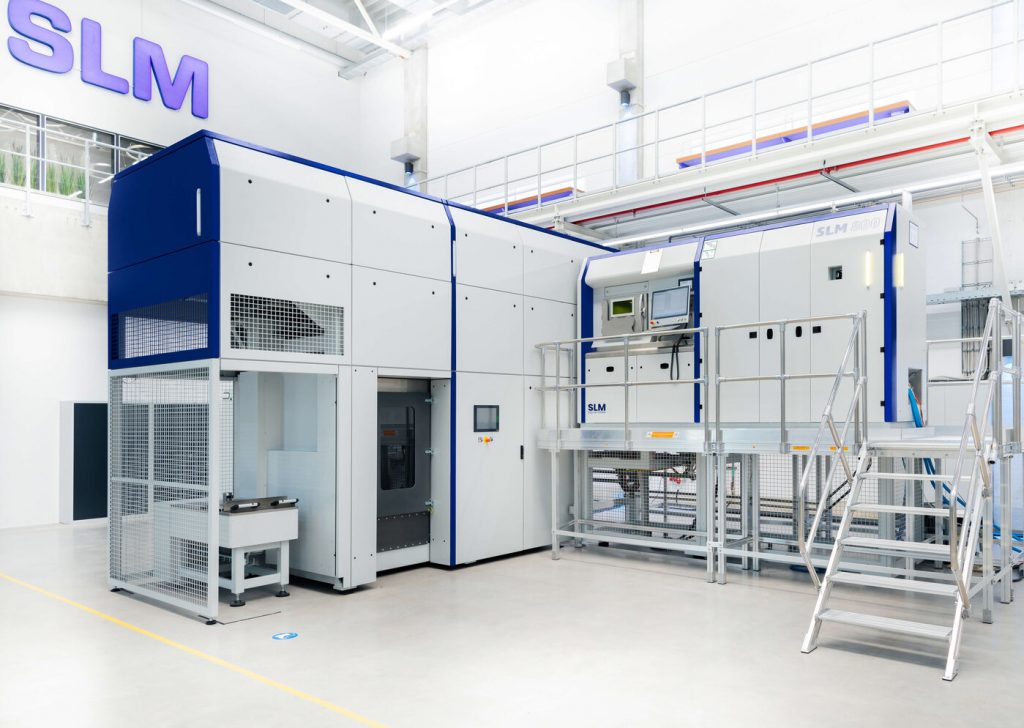 The metal printing expertise of SLM

SLM Solutions specializes in the development of machines that operate with its proprietary SLM technology, in which a high-power laser selectively melts alloy powder layer by layer into complex parts. The company’s system portfolio currently includes the SLM 125, SLM 280, SLM 500 and SLM 800 3D printers, as well as the recently released NXG XII 600.

With its latest NXG XII 600 machine, SLM Solutions has specifically targeted applications with a larger format and higher throughput. The machine has 12 overlapping 1 kW lasers, which can be operated simultaneously, and a building envelope of 600 x 600 x 600 mm, with which large quantities of end-use parts with layer thicknesses of up to 120 µm can be produced.

While the NXG XII 600 has recently found major automotive applications, five systems have also been purchased from an undisclosed European OEM that may be in the aerospace industry. Given that SLM Solutions also worked with Honeywell last year to develop a set of parameters for 3D printing aluminum F357, it is clear that the company sees a bright future for its technology in the aerospace industry.

Recent advances in 3D printing technology have led to the development of an increased number of ready-to-fly parts for commercial, prototype, and military aircraft. Boom Supersonic’s XB-1 prototype, for example, is equipped with 21 flight-critical VELO3D additive parts designed for printing at supersonic speeds.

Premium AEROTEC has been working with GE Additive for 3D printed parts in the aerospace industry for several years. The companies recently announced a serial production milestone. With the help of the Concept Laser M2 3D printer from GE Additive, the companies were able to produce larger titanium parts than before and at a speed 30% faster.

In terms of military applications, Saab has successfully tested 3D printing to perform quick repairs on fighter jets. Just last month, the defense maker managed to install an additively manufactured polymer hatch on the outside of one of its Gripen aircraft and conduct a test flight over its facility in Linköping, Sweden, without incident.