A team of researchers from Meiji University in Tokyo adapted an inexpensive FDM 3D printer to create an all-in-one manufacturing robot.

The so-called Functgraph can automatically print and attach custom tool heads to change its active functionality. This gives users the ability to grab, rotate, and break 3D printed objects to put more complex mechanical systems together in a single print job. To demonstrate the capabilities of the custom robot, the team has already used it as a sandwich maker, t-shirt folder, end-to-end assembly line for toy cars, and more.

The Meiji team wrote, “We are introducing new ways to use a 3-D printer head as a 3-axis robotic manipulator to allow for advanced manufacturing and use, e.g. B. assembling separately printed parts, breaking substrate materials and actuating printed objects on a building board. “

The team used the Functgraph as an assembly device for miniature toy cars. Photo via Meiji University.

As advanced as modern FDM systems are, the end-to-end 3D printing workflow is still very manual. Once the 3D printing phase is complete, post-processing typically requires a human technician to remove the part from the build plate, remove any support structures, and if it is a component, integrate the part into an assembly. This is the hurdle that the Meiji team is trying to overcome with the Functgraph.

To kick off the project, the researchers first designed and printed two custom tool head switches – one for attaching end effectors and one for detaching them. These switches have been designed so that they can be integrated directly into a commercially available Creality CR-10 3D printer and work with a very simple clip-on / clip-off mechanism. 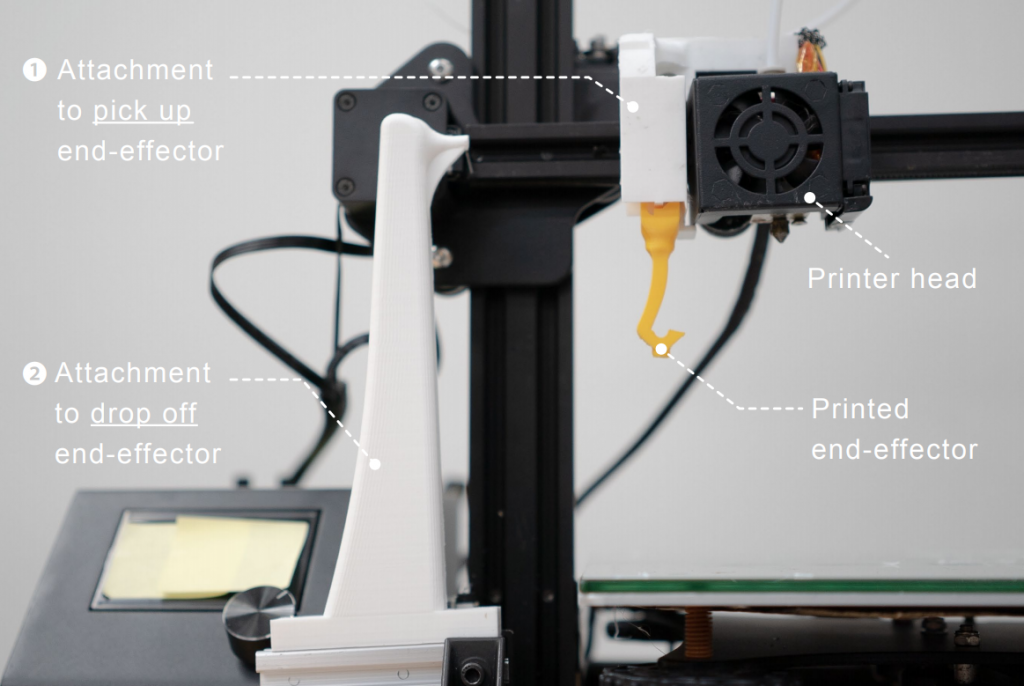 This is demonstrated in the example below, in which the researchers used the Functgraph to print and assemble an entire bevel gear system from scratch. First, the individual gears were printed flat and, along with the end effector (a hook) required for their assembly, were not assembled on the build plate. The printhead then pulled the hook off the bed, using it to fold each gear into the final mechanical assembly – all with a Gcode file.

Of course, snap hooks and folding components will eventually exhaust the use cases. So the team developed four key manufacturing moves that can be used together for more advanced projects. Folding is the first of these and can be used to snap components together using printed hinges and ball lock mechanisms.

The second key operation is the actuation, which is a rotation-based movement. Demonstrated with a small coffee grinder, the actuator can be used to grind coffee beans and perform other circular motions.

Demonstration of the operation with a 3D printed coffee grinder. Photos from Meiji University.

Breaking support structures is the third key move and allows users to free their printed components from their supports using the printer’s Z-axis motor and a rod-shaped end effector that acts as a spear.

Last but not least, the Functgraph also has a sliding process. Sliding is possibly the most important movement as users can nudge objects into one another to create assemblies or even perform cutting movements on food with a blade end effector. By intelligently using combinations of these four operations, the Functgraph can serve as an adaptable manufacturing robot for a variety of creative applications. 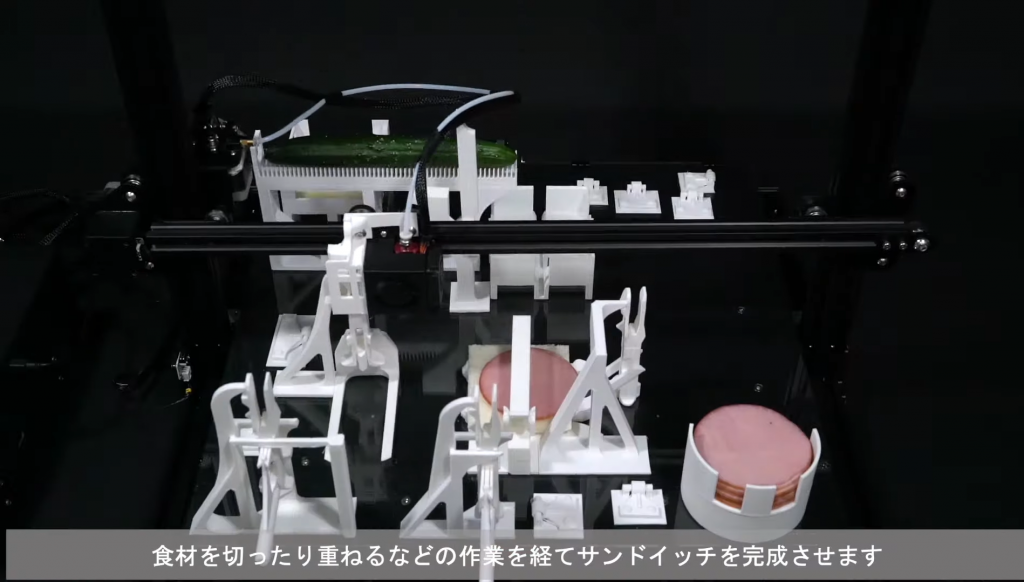 For more details on the project, see the article entitled “A 3D Printer Head as a Robotic Manipulator”. It is co-authored by Shohei Katakura, Yuto Kuroki and Keita Watanabe.

Customized 3D printing systems such as the Functgraph are widely used in academia. Earlier this year, researchers at MIT’s Computer Science and Artificial Intelligence Laboratory (CSAIL) developed a hardware add-on that converts commercial laser cutting systems into hybrid 3D printers. The electromechanical assembly called LaserFactory attaches to the head of a laser cutter and results in a comprehensive manufacturing platform that can be used to create and assemble fully functional electronic devices such as drones.

At the Technical University of Denmark (DTU) researchers recently repurposed a component of a Microsoft Xbox 360 for the development of a high-resolution nanoscale 3D printer with various applications in the medical field.

The picture shown shows the functgraph that is used as a sandwich maker. Photo via Meiji University.

The artist injects color into the plastic bubble wrap, creating works of art